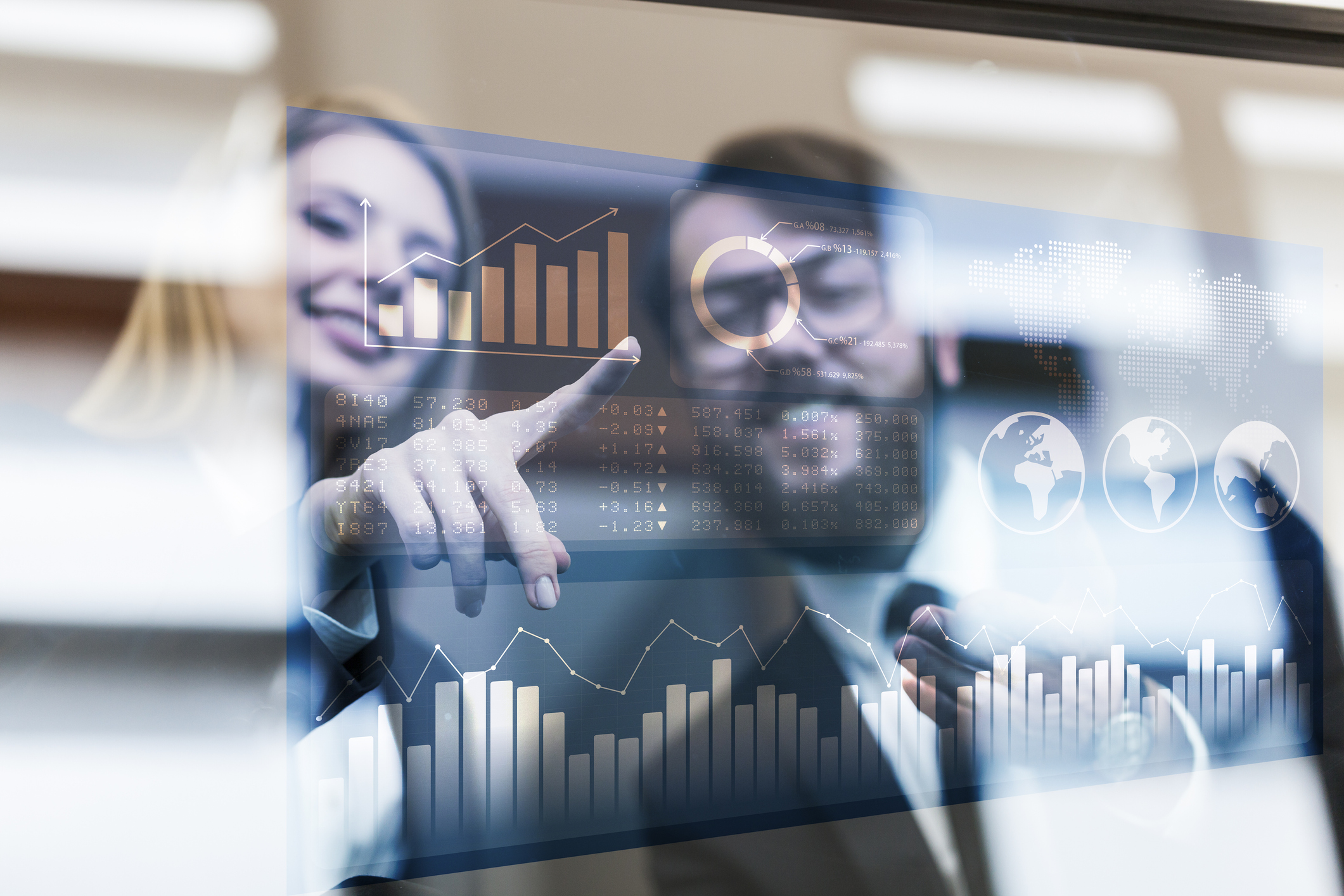 The Entire History of Target Date Fund Performance From 2007-2018

The past 12 years serve as an interesting testing ground for target date funds (TDFs), and represent the entire track record for their use in 401(k) plans. The period begins with a 56% loss in the U.S. stock market from October 2007 to March 2009, followed by an extraordinary 340% gain. Because they’re more aggressive, TDFs for younger participants have outperformed those for older participants. But there’s a more interesting question to be answered: Have aggressive TDFs for a particular target date outperformed conservative TDFs for that target date? We answer that question by reporting on performance on a standard for each level of risk

As detailed in our benchmark article, the Big 3 TDF providers manage 65% of the industry, so they are in effect the industry. As shown in the following graph, the Big 3 gidepaths are quite similar especially in the Risk Zone that spans the 5 years before and after retirement, and are what we define as “aggressive.”. The graph also shows the SMART Target Date Fund Index that we use as our measure for a conservative glidepath. 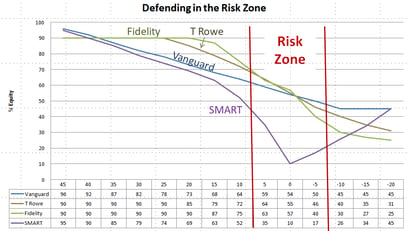 As you can see, the Big 3 are all 55% in equities at the target date, whereas the SMART Index is 10%. For simplification in the following, we compare the performance results for the entire TDF industry to those of SMART. The “Industry” is of course predominantly the Big 3.  In this analysis the “Industry” represents aggressive allocations and SMART represents conservative.

In addition to being more conservative at the target date, SMART is more broadly diversified, which mostly affects the performance of long-dated funds. 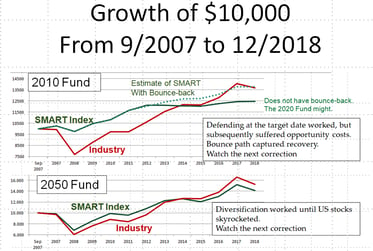 (Disclosure: SMART went live in August, 2008. Prior performance is backtested.)

As you can see, the conservative SMART Index outperformed the aggressive Industry index for the first 7 years 2007-2013 due to defending in the 2008 market loss. Avoiding loss had a large long-lasting benefit.

The original design of SMART ended at the target date – it was a “To” fund – but this design has since been changed to re-risk in retirement. This new design will likely be implemented with the current 2020 fund, but the graph shows what would have happened had the SMART 2010 fund re-risked – it would have kept pace with the Industry.

Similarly, the broad diversification in the SMART 2050 Fund put it ahead of the Industry for 7 years, but then the Industry concentration in U.S. stocks gave it a modest edge. U.S. stocks have led all asset classes in the past decade, so concentrated, less diversified, funds have led the performance marathon.

The year 2008 had many lessons that have been forgotten, but 2018 provides a reminder. TDFs are multi-asset fund-of-funds that typically hold the asset classes shown in the following exhibit.  As you can see, all asset classes except U.S. bonds lost money in 2018. U.S. stocks, which lost 5%, are the predominant holding in most  long-dated TDFs. but as discussed in the next section the average long-dated TDF lost more than this because they also hold some  foreign stocks. 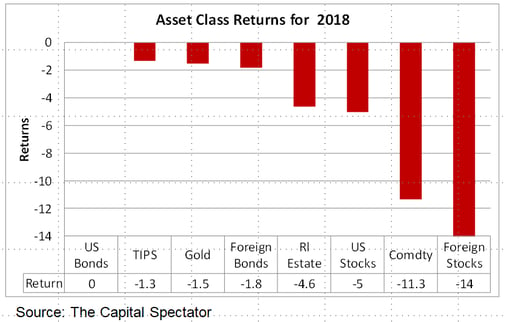 The following graph shows the performances of several potential standards: the median fund, the S&P TDF Index, the SMART TDF Index, and the Big 3. 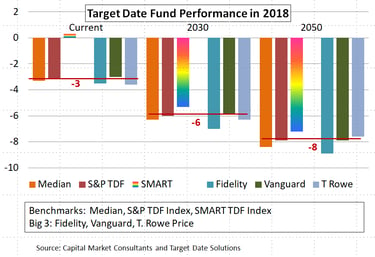 The SMART TDF Index for Current funds was the only fund with a positive return in 2018, due to its conservative (safe) asset allocation. The 2030 and 2050 SMART Funds were also the best performers due to their broad diversification that includes TIPS, gold and real estate.

Fidelity’s TDFs were the worst performing due to their higher risk.  Fidelity increased equity allocations in 2017.

“It is worth remembering that winning the long-term investment game has more to do with avoidance of losses than the capturing of gains. It is a function of math.” Lance Roberts.