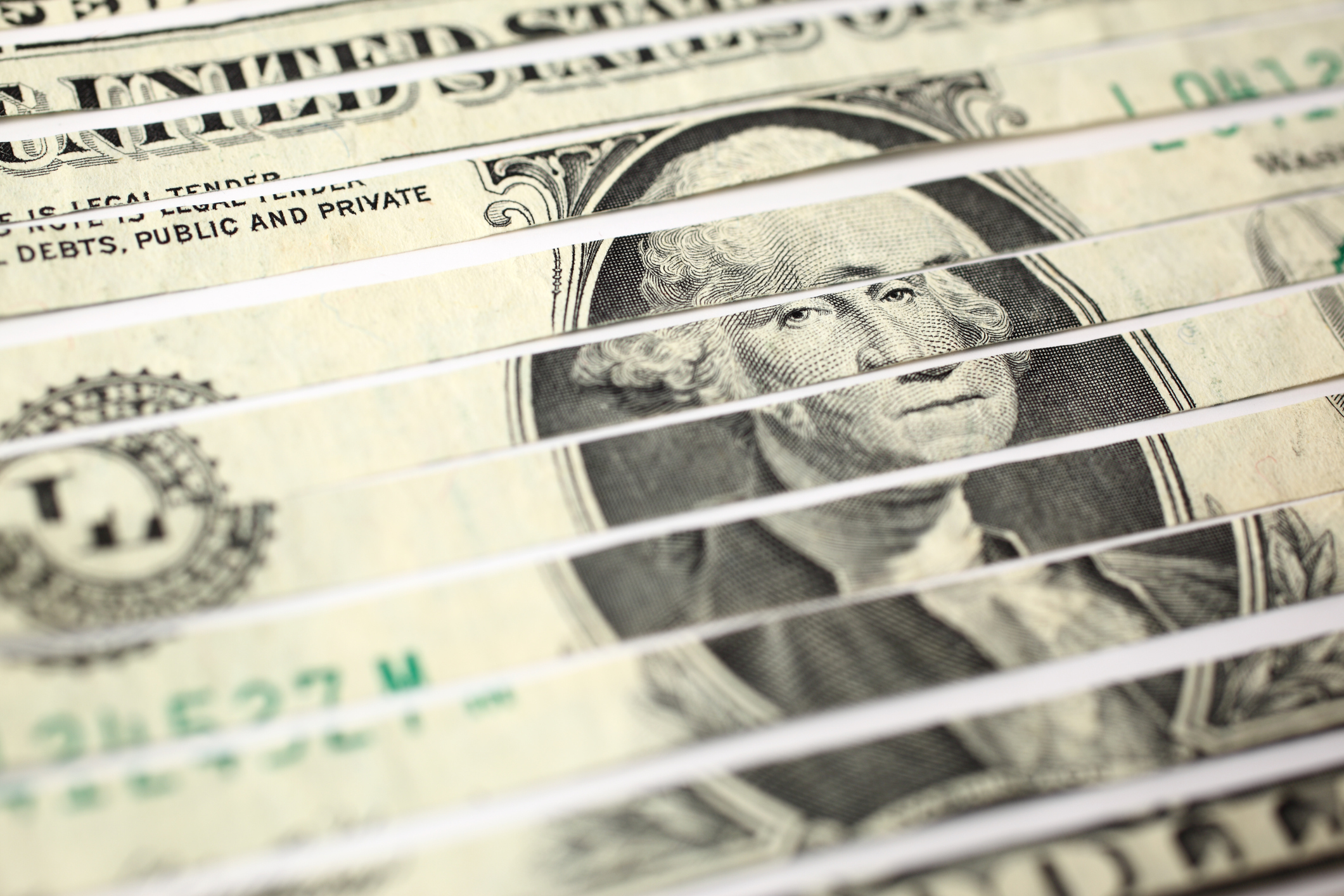 The Good, the Bad, and the Ugly of Inflation

The Federal Reserve (“the Fed”) is charged with fueling the economy with just the right amount of printed money to keep it running smoothly. Money is the lubricant that keeps the economy running. The Fed’s success gauge is inflation, as measured by changes in the Consumer Price Index (CPI), and ranges as follows:

An increase in the money supply may be called monetary inflation, to distinguish it from rising prices, which may also for clarity be called "price inflation". Economists generally agree that in the long run, inflation is caused by increases in the money supply. The other distinctions are “demand-pull” and “cost-push.” Demand-pull inflation results when demand exceeds supply, so prices for (some) goods are bid up. Cost-push inflation results when the costs to produce goods increases and these increased costs are passed along to consumers.

As shown in the following  graph and table inflation has averaged 3% and ranged from a low of -11% to a high of 17%. As discussed below in the “Ugly” section, these ranges do not govern the future. 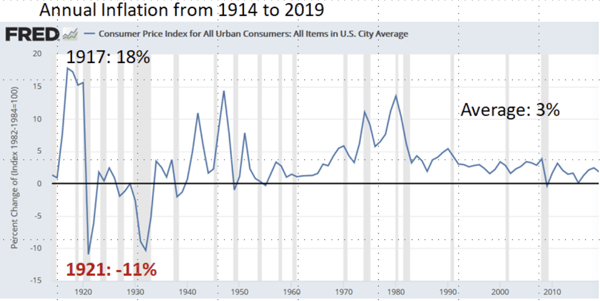 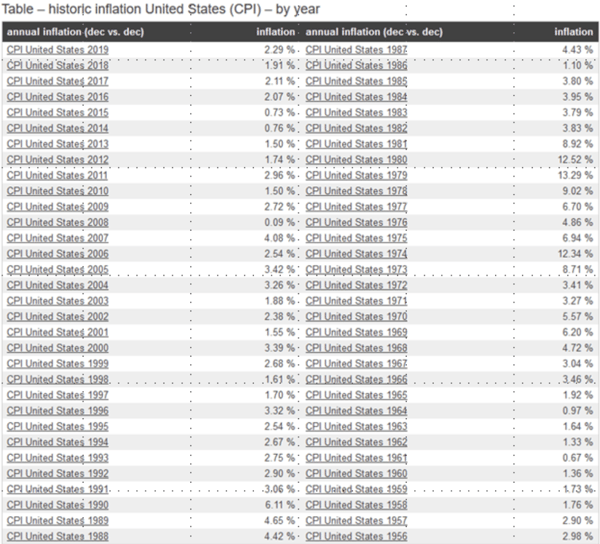 In the following we define and discuss the good, bad and ugly states of inflation:

Good inflation is just enough money supply to keep the economy growing at an acceptable pace, which in the U.S is about 3% annual growth in Gross Domestic Product (GDP).  If the economy slows down, the Fed can stimulate by “printing money”. If it heats up, the Fed can slow down the money supply and increase interest rates.

Recent Fed actions in response to the meltdown in 2008 have created a new and unique situation. Quantitative easing (QE) has increased the money supply but inflation has remained subdued at around 2%. The reason is that QE has created a non-traditional rise in inflation by inflating security prices but not consumer goods.

Economists use the following formula to understand inflation:

The “M” has increased by $4 trillion under QE, but it has not moved the “P” needle because “V” velocity has been very low.  Velocity is the speed at which money circulates. It’s been low because the new QE money is going to a small group of investors who are not spending it. Instead they are investing it, and inflating security prices. QE buys mortgage-backed bonds from issuers and investors, who in turn use the proceeds to buy stocks and bonds, especially in share buy-backs.  True underlying inflation has not been manifested in CPI. It’s showing up big time in stock and bond price inflation.

You can view that QE “worked” by buoying up security prices which in turn reversed the 2008 recession threat. The wealth effect headed off recession, but it did in fact amplify wealth disparity, with the rich getting richer. The unwinding of QE could easily lead to “Bad” or even “Ugly” inflation, as discussed in the following.

Too much inflation and negative inflation (deflation) are bad.   The negative effects of excessive inflation include an increase in the opportunity cost of holding money, uncertainty over future inflation which may discourage investment and savings, and if inflation were rapid enough, shortages of goods as consumers begin hoarding out of concern that prices will increase in the future.

Deflation, defined as a decrease in inflation, is a characteristic of recession. As an economy slows, so does consumer spending, so producers need to lower prices.

The Fed can try to control excessive inflation with increases in interest rates, but sometimes this “cooling” attempt doesn’t work, as was the case in the mid 1970s when the US experienced simultaneous high inflation and recession, called “stagflation.”

Someday the Fed will unravel QE by selling its holdings of mortgage-backed securities, at which time it will need to induce purchases by paying higher yields (i.e. charging lower prices). We got a hint of what could happen in the fourth quarter of 2018, when the US stock market lost 14%. The Fed backed away from unraveling QE and the stock market grew more than 30% in 2019.

The Fed has a very delicate situation that could ultimately reveal that the 2008 recession has merely been postponed and could be much worse the next time.  When QE was launched proponents said that if you need to pee on the fire to put it out, you can’t worry about cleaning up the pee. The clean-up could lead to the Ugly discussed in the next section.

A few years ago, the Cato Institute released its working paper on “ World Hyperinflations.”

How bad can inflation become? The Cato Institute working paper examines the 56 occurrences of hyperinflation across the globe. The worst of the worst was 200% per day in Hungary from August, 1945 to July, 1946.

Many believe that we will see serious inflation around the globe because we cannot afford the humongous debt we’ve incurred.  Inflation benefits the borrower at the expense of the lender. For a painfully funny borrower perspective, see the “Saturday Night Live” skit at China Sin-Drome.

To defend against Bad or Ugly inflation, investors can purchase inflation protected securities like Treasury Inflation-Protected Securities (TIPS). Floating rate bonds might help too, but most are low quality and could default in the face of high inflation.