Understanding the Severity of Coronavirus

This report is compiled from several reliable sources, with much of it obtained from Morningstar's View: The Impact of Coronavirus on the Economy. At the end of this quarter, we’ll write a companion piece entitled “The Wealth Effects of the Coronavirus” that will discuss the other aspect of the health-wealth connection. In the meantime, please read our concerns about the debt crisis that will worsen with planned Fed interventions and our baby boomer advice.

Coronavirus: Any of various RNA-containing (RNA is ribonucleic acid) spherical viruses of the family Coronaviridae, including several that cause acute respiratory illnesses.

Coronaviridae: Single-stranded RNA viruses that are surrounded by a lipoprotein envelope with large club-shaped projections that infect birds and many mammals including humans.

Ebola: A deadly disease with occasional outbreaks that occur primarily on the African continent.

MERS: A Coronavirus called Middle East Respiratory Syndrome Coronavirus (MERS-CoV). Most MERS patients develop a severe respiratory illness with symptoms of fever, cough, and shortness of breath. About 3 or 4 out of every 10 patients reported with MERS have died.

Seasonal flu: Influenza viruses are members of the family Orthomyxoviridae.

The severity of diseases is a function of (1) contagion and (2) fatality. It is not yet known just how contagious and how fatal the COVID-19 pandemic will become. Morningstar has created three possibilities shown in the following table. The “Bull” case is very similar to the seasonal flu. In other words, Morningstar assigns a 25% chance that COVID-19 will be about as bad as the common flu, which of course we all hope will be the case.

The following graph compares these three possibilities to epidemics in the past. 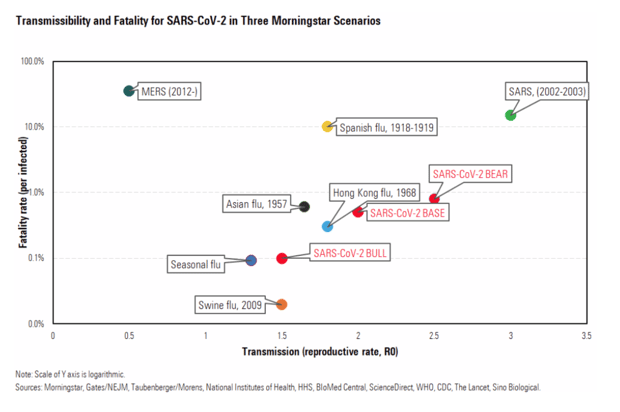 As you can see, the expected severity for the base level is comparable to the Hong Kong flu of 1968 that originated in China and lasted for 2 years. But even the worst-case COVID-19 severity is far less than the 2002-2003 SARS epidemic that infected 8000 people worldwide, killing 800 (10%).

As of the day of this writing, COVID-19 had infected 217,000 people worldwide, killing 9000, so its transmission rate already exceeds SARS by a factor of 3, but its 4% fatality rate is less than SARS’ 10% rate. It’s looking more like the “worst case” could be even worse and with a higher likelihood.

One of the biggest changes since SARS is the advances in technology needed to understand the virus and develop diagnostic tests or treatments.

In January, Chinese scientists had already sequenced the virus, which first appeared in December. They also made that information available to scientists around the world. With SARS, it took scientists about 5 months to identify the virus after it began to spread.

“Having information quickly really helps public health officials start to contain it,” said Rimoin. “So the ability to rapidly identify viruses — and identify that you have a new virus — is an extraordinary and important new development.”

Genetic information about the virus is needed to help scientists develop diagnostic tests for the virus, as well as treatments and vaccines.

Several groups are already working on a vaccine. However, even with faster vaccine development compared to 17 years ago, it could still be 12 to 18 months before a vaccine is ready for widespread use in people.

Hydroxychloroquine is an antimalarial drug with FDA approval identified as a potential treatment by President Trump in a 3/19/20 press conference.  In a recent study conducted in France, scientists observed a "significant" reduction in viral load in the patients treated with hydroxychloroquine, and that the effect was reinforced by an azithromycin antibiotic.

Gilead Sciences’ remdesivir has a huge lead in development among unapproved drugs because it was on the shelf after being initially developed for Ebola, which allowed Gilead to quickly move into studies when it saw signs of efficacy in coronaviruses. As of now, there are no approved therapies for any coronavirus infection, and remdesivir is the farthest along in the development process of any candidate.

Moderna’s mRNA-1273 is the most advanced among vaccines. It has created a nucleic acid-based vaccine, basically providing the body with the blueprint to manufacture certain proteins that are present on the virus. The body then mounts an immune response to the protein, but also to any virus with that protein on display.

Beyond Moderna and Gilead, dozens of other firms are vying to enter the market. Help is on the way. Let’s hope it arrives in time to save lives. Morningstar’s severity analysis above has factored in the likely success of these efforts.

As former Secretary of Defense Donald Rumsfeld said: “We don’t know what we don’t know.”  While we’re figuring it out, we need to heed the guidance of health professionals to keep ourselves healthy.