What Does Recession Mean For Your Retirement?

In the first 2 weeks of August, 2019 the Dow Index fell 1700 points, about 6%. The first drop in prices was attributed to the US trade war with China, but then an inverted yield curve became the culprit, bringing the Dow down even further. “Inversion” occurs when the yield on 10-year government bonds falls below the yield on 2-year bonds. Inversion has been a very good predictor of recessions in the past, most recently the 2008 crash.  No matter who or what you blame, stock markets around the world are extremely fragile, with investors terrified of the next correction.

But what will ultimately cause the next stock market decline and how bad will it be? We think the world debt crisis will crash stock and bond markets and more. Manifestations of the debt crisis have just begun, as shown in the following graph. 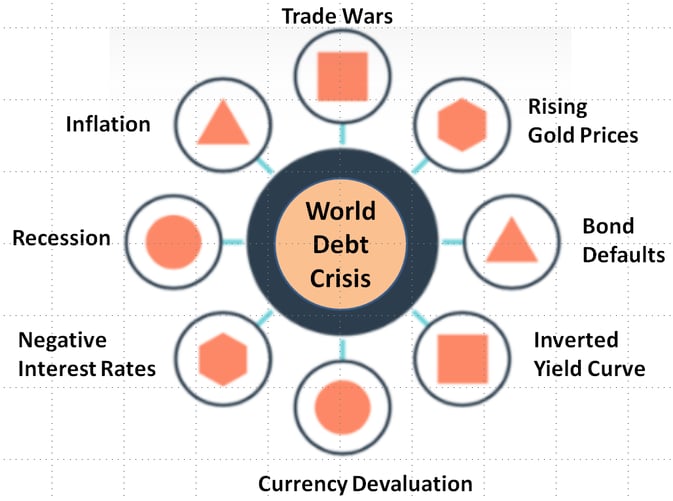 The world has never been this broke, and it is on a self-destructive path of profligate borrowing.

Here’s how broke the world is. 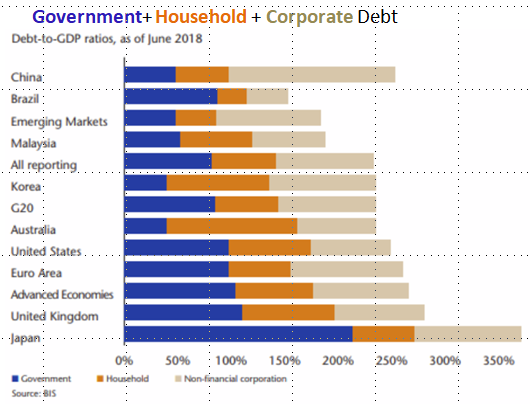 Although no one knows what the limit on borrowing might be, there is some amount that will reach what is called “debt exhaustion.”  In The Coming Global Financial Crisis: Debt Exhaustion, Charles Hugh Smith observes:

The global economy is way past the point of maximum debt saturation, and so the next stop is debt exhaustion: a sharp increase in defaults, a rapid decline in demand for more debt, a collapse in asset bubbles that depend on debt and a resulting drop in economic activity, a.k.a. a deep and profound recession that cannot be "fixed" by lowering interest rates or juicing the creation of more debt.

Even if it’s not the cause, debt has a history of predicting market crashes. In A Brief History of Doom: Two Hundred Years of Financial Crises author Richard Vague demonstrates that the over-accumulation of private debt does a better job than any other variable of explaining and predicting financial crises. The 2008 crash is a recent example.

A number of other economists agree. Steve Keen, an economics professor who heads the School of Economics, Politics and History at Kingston University, outlines a persuasive case in his book “Can We Avoid another Financial Crisis?” for why rising private debt tops the list of possible triggers for the next financial crisis and recession.

We owe each other money that won’t be paid in today’s dollars. At some point, countries can no longer borrow, so they are forced to print money, thereby monetizing the debt, devaluing their currency, as China did in August 2019. Devaluation is inflationary because more cheap dollars are required to buy the same goods.

The devaluation of the Chinese yuan also serves as a tactic in the trade war with the US, mitigating the effects of US tariffs.  But make no mistake. China is suffering a debt crisis, so the trade war is a cover to what China realizes it must do. Bond defaults in China are unprecedented and on the rise.

As stock markets were declining in August, gold was setting new highs, rising above $1500 per ounce. Much of the increase was fear generated, moving to safety, but some increase was generated by currency devaluation and negative interest rates. Currency devaluation means it takes more currency to buy gold. Negative interest rates mean investors are guaranteed to lose money if they hold bonds to maturity, whereas gold is likely to at least hold its value.

Currency devaluation could lead to more reliance on gold as a form of money.  Economist James Rickards estimates that if gold became the world currency standard its price would rise 700% to $10,000 per ounce.

Governments   try to avert recessions by lowering interest rates, and that works, until it doesn’t. Many countries, especially Japan, have lowered rates to the extreme, going negative. Altogether, a jaw-dropping $13 trillion in global government debt—a new record—was offering sub-zero yields in June 2019. Investors are guaranteed to end up with less than the bond’s principal amount if held until maturity. There are no “safe investments,” so it’s a dreadful time for everyone who’d like to protect their savings; investments with guaranteed losses are not safe. Negative bond yields are absurd, and a clear sign that something is very wrong.

How to protect your investments

Treasury bonds will not provide the safety that they have historically offered because they’re at the heart of the problem: financing the debt.  A well-diversified portfolio of inflation-protected assets will help, like Treasury Inflation Protected Securities (TIPS), commodities, and real estate.

There will always be life events to which we each react in our own ways.  Since we only get one life path, each decision is very important. Today’s decisions weigh heavily on our future, so it’s important to have a lifetime investment plan that puts today’s decisions into perspective.  That’s why we created GlidePath Wealth Management  to help investors deal with life’s investment challenges

Please see our “Per Capita World Debt Surged Above $200,000” for more details on the global debt crisis.